This blog was started as my reflections on the 2011 Change MOOC. It is now an on going journal of my thoughts on Higher Education, specifically teaching Biology.

Learning Beyond the Grade: Gamification and Badges

I have been playing role-playing games since I was 8 (which ultimately means four decades...yikes, that is what this birthday is).  When I was a kid, I even used the codes from magazines and books to build computer games on my Apple II.  My calling wasn't computer games or RPG design.  I've done some of it, and have had friends in both industries that I've talked to about gamification of courses.

I started about a year and a half ago with badges.  University Relations at GSU helped me make the badges (I am still saddened by my originals which I gave to them :).  We created a set of badges for what I was doing at the time.  Here are some of the examples of the PAWS UP! badges.  NOTE: the name comes from our campus mascot, Pounce the Panther.  Unfortunately, the faculty is not allowed to use Pounce.  Only athletics gets to use Pounce (GRRRR!).  So I decided to use the pouncing panther paw, so PAWS UP! 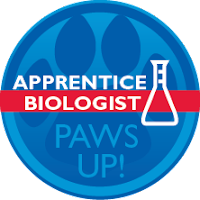 This is the Apprentice Biologist badge, which is given at the course completion (even to people who come into the LMS and complete the online/hybrid component of the course).  There is a criteria of tasks to complete to earn this badge. 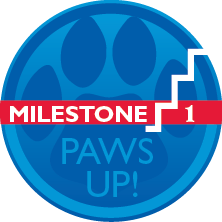 The next badge is regarding Milestone.  At three points in the semester, students have to present a milestone paper which is a summation of what they have learned during the preceding weeks.  Once aspect of the paper is as a study guide for their Milestone Exam.  At the end of the semester, students will clean up their individual milestone papers, combine them, and add reflections.  This will ultimately be part of their portfolio, and also act as a study guide for higher level classes.  Completion of the paper and exam (which is 70% in numbers) gives them the milestone badge. 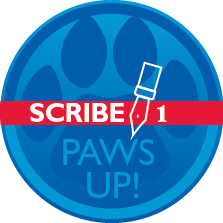 Students also have to participate in daily forums.  There are badges set for when they complete a certain number of posts (the automated system on this one broke this semester...still working on fixing it).

When I first attempted gamification, it was a disaster.  The problem was turning traditional assignments and grades into a gamified system.  I tried different ways of doing it, but they all ended with points.  Even the badges worked that way.  In reading literature and blog posts, I rarely found models that I could reinterpreted for biology.


This semester, I have a new tactic with grades.  All assignments are completion based, and final grades are determined by task/assignment completion.  I'm still in shock at how motivated most students are this semester, but it has been a drain setting up the system and refining it during the semester.  My goal is to reimagine the badges so that the achievements they represent become the assessment of the students performance.  In other words, grading based entirely on achieving course outcomes instead of looking at graded performance on assignments.
Posted by Robert Maxwell at 11:25 PM