This blog was started as my reflections on the 2011 Change MOOC. It is now an on going journal of my thoughts on Higher Education, specifically teaching Biology.

The Future of Learning

Today at Georgia State University, President Becker and George Pullman (Director of GSU's Center for Instructional Innovation) held a forum on "The Future of Learning in Higher Education."

It was a well attended forum, but as noted by one audience member, it "attracted only the converted." Hearing some of the questions, I'm not sure if it did attract only the converted, but those of us who have been trying different techniques and technologies were in the majority.

Our President laid out three areas for us to consider:
The focus of the forum was really bringing everyone up to speed with current changes, and topics like KhanAcademy and the Standford University Artificial Intelligence online course were highlighted.  Mention was also made of MIT's open courseware.

Wisely, George Pullman indicated that the goal was not to replicate what others had done, but to "Reinvent the Wheel" for our campus.  The President seemed to be on the same page, indicating that the goal was to define what the GSU undergraduate experience is all about, even if students are taking online or hybrid (blended) classes.

The Q&A was short, but brought up some good points, including how failed attempts are handled, how to protect faculty that try innovated course ideas, and how to encourage it.  The President was quick to add that the administration would not force anyone to change their styles, but also indicated that what is innovative now is commonly used only after a few years.

Some of the audience wisely addressed the concern that while the technology is great, what really has to be done is a complete overhaul of how we deliver information.  Going further, it is how we conceive of the course and its outcomes.

I left the meeting hopeful, but with some caution and concern in my heart.  From comments, it is obvious that the President is behind forging ahead with new course design.  He even mentioned the idea of looking at what a new instructional room would look like.  George Pullman is working diligently to gather all the innovators together, and to also gather those interested in hybrid (blended) courses.

But there was also the old caution: go slowly, 'Don't try too many things at once."  When they are talking about spending years changing courses, I spoke up and added "...then you rip of the Bandaid."  It is fine to get your feet wet by changing things around, but eventually most of us have realized we have to flip our classes.  That's not slow!  You may have tried out a few minor things, changed some assessments, but when you finally flip your class, it is not a small endeavor.  Many things have to change simultaneously, and the students might not like it (most likely will not like it as it is more work for them).

Why does this seem to upset me?  We have people on campus who have finally started to use clicker systems.  They are so proud of themselves, but it is technology that is over a decade old.  Heck, in the 90's, I used wired systems that ultimately became clicker systems.  We had a whole room wired for this.  Now we have Internet systems, where students can use smartphones, pads and computers to log answers.  The answers no longer have to be multiple choice!

The common concern of my colleagues?  "I don't want the students using computers in class." 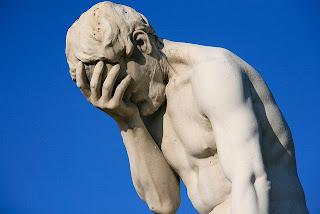 Heck, we have research scientists who still think they can get grants by themselves from the big federal funders (have they not been paying attention?).

People often talk about resistance to change in Universities, and this blog post was not suppose to be an addition to those discussions.  Yes, you have to show them that it works.  But another great idea is to just to mentor new hires.  Instead of letting them walk into a class, sit down with them and bring them into your course projects.  Wouldn't that be a much better way of changing the system?

So what is the answer?  The following is a list of my "Pushes", that is, things I would like to push for as we move forward.

1)  In my blended class, I would like to spend the "lecture period" in a biology studio environment where students could work on experiments, activities and case studies aimed at the 'topic of the week.'
2)  I would love to build a fully integrated biology freshman learning community in which the biologists, chemists, English, history and philosophy instructors work together to build an integrated year long blended course.  While there would be some "at your own pace" activities, there would also be scheduled milestones and seminars.  Instead of set lectures, I would love for there to be forums and selected seminars for the students.  For example: if you need help in editing, there is an editing workshop sponsored by the English instructor.  If you need help in molarity calculations, the chemisty would hold a workshop.  If you wanted to learn more about bioethics, the philosophy instructor would host a forum on bioethics.  Some seminars would be planned, others would be ad hoc based on the interest of students.  The learning would be recorded in social media, blogs, and milestone assignments.  Up front, the students would have the SPECIFIC and CONCRETE learning objectives of the topics.
3)  Using the Degree Qualification Profile (DQP) of the Luminia Foundation, go through our biology curriculum and really set milestones for the students.  Publich well articulated outcomes which students know they must acheive to pass a milestone.  With the technology we have, I would love to digitally badge each milestone, so that students have Milestone Achievements as they work toward degrees.  Potential employers and internship partners could look at the badges to see the competency of the students.

There is another, but it is out of my head for now.  Anyway, that is what I would like to push for over the next year.  Some of it is already in the works, while I'll need time for some of the other aspects.